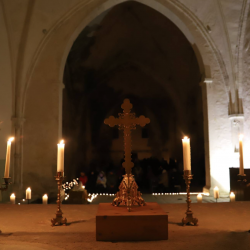 The beginning of Pöide St Mary’s congregation dates back to the 13th century.

The Reformation in the 16th century saved the church and the parish of major clashes and destruction. However, the conversion movement of the mid-19th century diminished the numerous congregation of Pöide Church: by the year 1848, two-thirds of the population of Pöide parish had converted from Lutheranism to Russian Orthodoxy.

Between 1944 and 1990, the building of Pöide Church changed owners several times. At present, the Pöide St Mary’s congregation restored in 1991 owns the Church.

Sunday service is held twice a month, at 13:30. In winter, service is conducted in the parsonage.

This may be a good place to introduce yourself and your site or include some credits.